One of several Masonic organizations, The Scottish Rite of the greater Boston area, organized a Murder Mystery Weekend at Inn Victoria in Chester, Vermont. “This was a fabulous time of fellowship for members and spouses”, said one of the participants!  “Tha 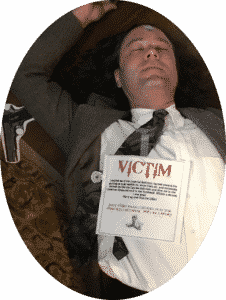 nk you Dan & Penny for the great time”…was the cheer from the group!

Twenty people came together at Inn Victoria for a weekend retreat of fellowship and a relaxing time together, using a Murder Mystery Weekend as the theme for fellowship.  One murderer, one dead person and 18 people to solve the crime!  “This group was amazing”; said Penny Cote, owner of Inn Victoria.  “The group was given their roles prior to arrival, they absorbed their cues and came prepared to play their parts…they did so with gusto!  As a result we all had a GREAT time!”

Other examples of Masonic affiliated organizations are: The Shrine (Shriners); York Rite;Grotto; Eastern Star, DeMolay International, Job’s Daughter’s, International Order of Rainbow for Girls and the Tall Cedars of Lebanon.  The Scottish Rite consists of the 4°–32° and an honorary 33°, which is awarded for exceptional service.